ABB has supplied its state-of-the-art power conditioning equipment to Severn Trent to support the 24/7 availability of power for Melbourne water treatment works (WTW), which supplies water for one million residential, commercial and industrial customers in the Leicestershire area. After monitoring the unit’s performance Severn Trent’s engineers have also now placed an order for four additional power conditioners. 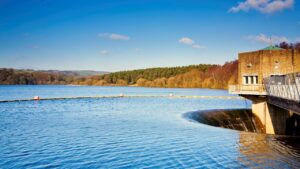 Voltage disturbances from the grid can interrupt the water treatment process, which includes dissolved air flotation (DAF), filtration and disinfection. Any interruption to these processes affects water quality and water production. The process can take eight hours to resolve, during which the site cannot supply water. Therefore, any voltage disturbance can lose one third of the site’s 240 megalitres per day (Ml/d) production, equivalent to 80 million litres.

As a result, Severn Trent has been dependent on nearby water treatment works such as Bamford, Church Wilne and Cropston to fully meet customer demand. In addition, Severn Trent faced extra costs and logistical challenges for outages overnight or at the weekend, when it needed to call in technicians from other sites.

Severn Trent wanted to reduce the likelihood that a simultaneous issue at one of these other sites could lead to a loss of water supply for customers. They turned to ABB to deliver a solution that would enable Melbourne WTW to ride through the voltage instability on the grid.

Before recommending a solution, monitoring units were installed to measure the size and timing of the voltage disturbances. These recorded several voltage sags and swells, some of which tripped the DAF plant.

Voltage sags and swells are usually very fast and can happen on the electrical power grid due to weather events such as lightning strikes, traffic accidents, vegetation connecting with supply lines, a short circuit or overload event nearby, or when nearby connected large electrical loads are switched on or off. The voltage instability can cause unexpected outages and can also damage high-value production equipment.

The ABB PCS100 Active Voltage Conditioner (AVC) is an inverter-based power electronic device with similar hardware to a variable speed drive. In operation, it monitors the incoming power supply continuously, and when it detects a voltage sag, it injects voltage to compensate for the change in the grid supply. As a result, the equipment downstream of the ABB PCS100 AVC receives a corrected, constant voltage supply. In turn, this avoids unplanned outages and protects sensitive electronic equipment from damage.

Over the following months, the installation was continually monitored to evaluate performance during power supply events that would have previously tripped the plant. Data from monitoring units and the ABB PCS100 AVC-40’s own data loggers identified three or four significant voltage instability events per month. ABB PCS100 AVC-40 rode through these events, performing reliably and Severn Trent did not experience any unplanned outages.

Aidan Murphy, Project Engineer for Severn Trent said: “The voltage issues previously affecting Melbourne WTW have been mitigated by the ABB PCS100 AVC-40. It sits in the background on site and has almost been fitted and forgotten about. From looking at the unit’s data event screens, it has been doing its job and has corrected around 300 events which could have previously caused plant stoppages.

“Simply put, the problem was solved overnight. The grid instability is no longer an issue and we can fully rely on Melbourne WTW to supply water into the Leicester area.”

Phil Tomkinson, Director of Sentridge Control, the UK Authorised Value Provider of the ABB PCS100 range, said: “The ABB PCS100 AVC at Melbourne WTW is one of the first in the UK and is therefore a landmark for the UK’s water industry. The monitoring data gave Severn Trent’s engineers the assurance in the performance, sizing, and payback period of the AVC and because we have extensive experience with ABB’s variable speed drives, we have confidence in the high quality of the PCS100 family of AVC products.”

The positive experience at Melbourne WTW has prompted Severn Trent to work with Sentridge Control, to specify and order an additional four ABB PCS100 AVC-40 units for Ogston, another water treatment facility in Derbyshire. The new units will be rated at 1,500 kVA each and CEMA are scheduled to install them during 2020.

For more information on improving your resilience, please visit www.sentridge.com

All content is © - Future Water Association
Site by JAM Creative